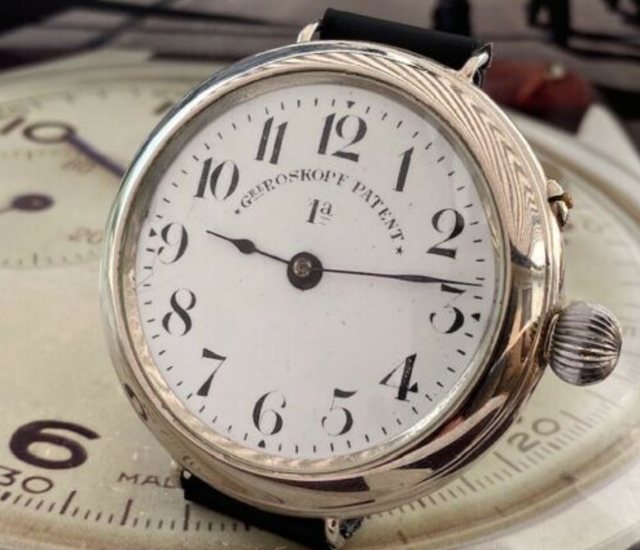 DON'T FORGET IF YOU WANT TO MAKE AN OFFER ON THIS WATCH EMAIL YOUR OFFER AND DESCRIPTION TO WW1WATCH@GMAIL.COM

Roskopf, A Voyage Through Time

In 1829, at the age of 16, George Roskopf traveled to La Chaux de Fonds, Switzerland, where he undertook a three-year apprenticeship as a sales clerk with Mairet & Sandoz, a firm selling hardware and watchmaker’s supplies. This was his introduction to the watch making industry.

In 1835, financed by his wife, he set up his own watchmaker business on 18 Leopold-Robert Street. This firm worked as “etablisseur“—a company that buys watch components and assembles them. A son, Fritz Edouard, was born the same year.

Roskopf sold his business in 1850 because it wasn’t profitable, moving to become the joint manager of the La Chaux de Fonds branch of Guttmann Brothers of Warburg, Germany. Then in 1855 Roskopf set up another business together with his son, Fritz Edouard and Henry Gindraux, as ROSKOPF, GINDRAUX & Co.

Roskopf was an idealist who dreamed of making good-quality, low-cost watches for the working man. In 1860 Roskopf began to design a watch that could be sold for 20 Swiss francs and still be of good quality, simple and solid. He called this watch “montre proletaire“—the laborer’s watch. Roskopf’s workingman’s watch was conceived built and taken to his target market. The die was set.

In 1867 Roskopf finally succeeded in producing his watch. The original production was 2,000 watches. By the end of 1867 he was in business and three years later he had expanded orders tenfold, producing 20,000 watches.

Roskopf’s wife died in 1872 and he, George Roskopf, died in 1889, and the business passed to his two step sons.

Roskopf’s grandson—Fritz-Edouard Roskopf—had one son, Louis-Frederic Roskopf. Louis-Frederic was not a watch maker, but dealer of tropical birds. Around 1900, when he realized that almost any watch company in La Chaux de Fonds was making money producing a “Roskopf watch,” he returned to La Chaux de Fonds and, together with watchmaker Léon-Henri Reinbold, founded the Louis Roskopf & Cie watch company. Trade marks were “Louis Roskopf S.A.,” “Petit Fils Roskopf” and “Roskopf Nieto.”

Around 1923, the companies merged with Reconvilier Watch Co. SA, a company active since 1902, and among others making Roskopf type watches. The company remained active till the 1970’s.

In the five-year span he invented and produced the “Roskopf watch,” the ultimate production was less than 100,000 watches. Louis Roskopf’s estimated watch production is 10 million watches!

And this is a Stunning Example of such a watch

The Case measures 52mm not inc crown or lugs

Pocket Watch Conversion at some time